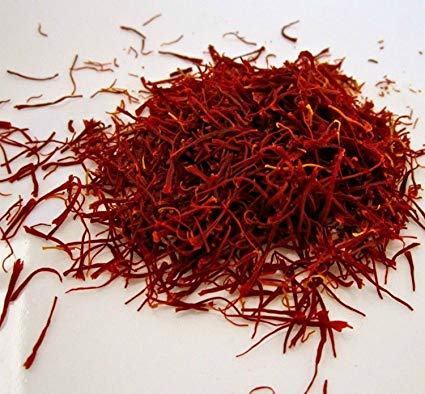 Saffron is the most expensive and most valuable spice derived from the dried bright orange-red stigmas of the flower Crocus sativus. It’s luxury flowers in purple which only blooms in the morning are difficulty harvested by hand. The more careful cultivation, the higher the price of saffron! Due to the wonderful properties of saffron and its high price, it is known as Red Gold in many saffron producing countries!

It seems that saffron was first discovered in Bronze Age Greece but now it grows throughout Asia and Europe. According to the UN Food and Agricultural Organization, Iran is the superior manufacturer of saffron, producing above 85% of the global saffron! The dry and sunny weather of Iran, as well as its farmer’s experience on saffron harvesting, caused Iran to be a well-known producer of the Red Gold across the globe.

Saffron is a historical spice! Cleopatra, queen of Egypt, was said to bathe in saffron-infused mare’s milk before seeing a suitor! According to John O’Connell in The Book of Spice “Saffron was used to dye the woolen bolero jackets worn by Minoan women; also in cosmetics, where it was mixed with red ochre, tallow, and beeswax to make lipstick,”

The 5 superior saffron exporters by country: 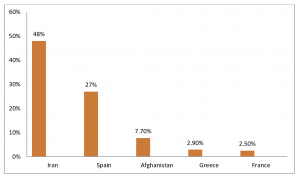 As seen in the picture Iran is the first producer, exporter, and consumer of saffron which produces over 85% of global saffron. Around 45 countries are purchasing saffron from Iran.  Due to Iran’s diverse climate and fertile soil, the country’s agricultural products are rated among the best in the world, with its saffron ranking second to none. Saffron cultivation has a history of more than 3,000 years in Iran, where this reddish and aromatic herb is widely used to flavor food and pastries, with further application in medicine and cosmetics!

The top export destinations for Iranian saffron are UAE, China, Spain, Afghanistan, and Vietnam. South Khorasan, Razavi Khorasan provinces and Hamadan city are the best producers of saffron in Iran both in quality and quantity.

The 5 superior saffron importers by country:

Historically Saffron was used to treating everything from heartache to hemorrhoids! This full of antioxidant spice is or may be helpful to: