Anzali port is the northern Iran’s major port and the seaside resort on the Caspian Sea. It is located about 40 kilometers north-northwest of Rasht (the capital city of Gilan Province) and 260 kilometers northwest of Tehran. Anzali port is famous as the “Global Capital of Precious Caviar.” It has been attracting many local and foreign investors since it became a free trade industrial zone on 2003.

Established in the early 19th century, Anzali port was occupied by Russians in 1920 and then they lost their power in 1921. Today, it surrounds the Mordāb Lagoon. The port lines a channel between sandy peninsulas, and the channel has irregular depths. Most of the port facilities are located on the eastern part of the channel, including a wharf, oil depot, and fishery station. 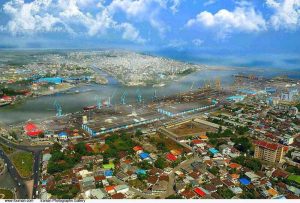 Anzali port covers 71 hectares and includes 22.7 thousand square meters of covered warehouse space, 50 hectares of uncovered warehouses, and a 1215 square meter hangar. The port of Anzali has 11 berths with total length of 1.7 thousand meters with alongside depth of 5.5 meters. All eleven berths can accommodate ships to five thousand tons.