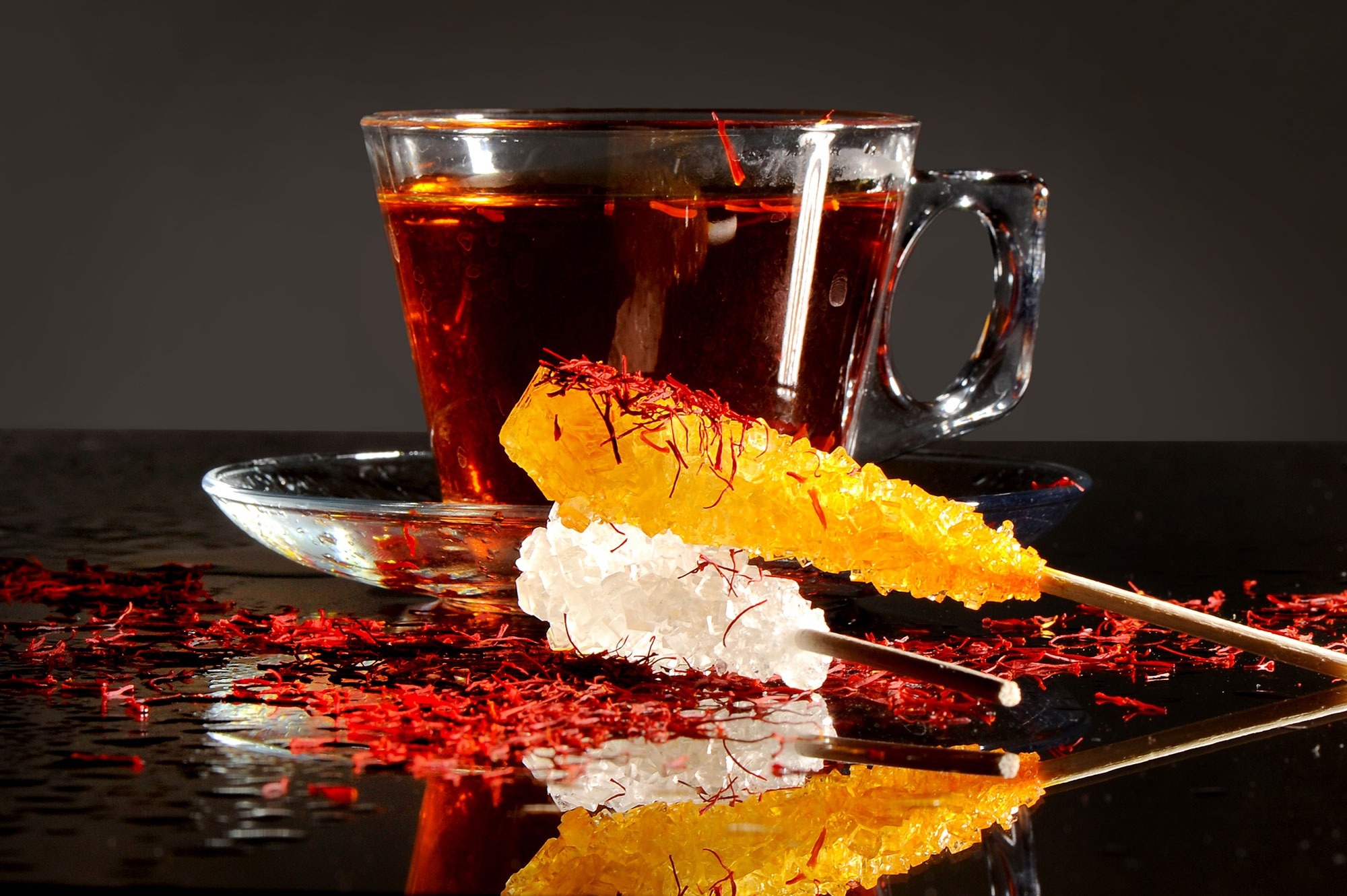 Rock candy or crystal candy is a type of sugar derived from sugar cane that crystallizes in a physical mechanism dependent on time and temperature and forms beautiful crystals. It is also known as Misri, the term of “Misri” refers to crystallized sugar lumps. Misri has its origin in India and Iran.In India misri is often uncolored or tinged mildly with orange food color. In Iran its name is nabaut and often uncolored or flavored with saffron. Rock candy has many properties for the treatment of diseases and has a warm nature that is used in the treatment of frigid. To make the rock candy, first dissolve the sugar in boiling water, then hang a string of yarn in the water and allow it to cool and form crystals around string.

Rock candy has a lot of properties and has a high antioxidant and laxative effect compared to other candies and contains a lot of sucrose and quickly absorbs the body.

Rock candy boosts the metabolism of fats and protein in the body by strengthening muscles, relieving sore throat and coughing in the cold. Rock candy is very nutrient and uplifting and relieves physical and mental fatigue from daily activities.

Rock candy is used to decorate wedding table and Haft-sin and to sweeten teas and herbal drinks.

The most widely used are lolly and branch rock candy, with a variety of flavors available on the market. Cinnamon, peppermint, saffron, cumin, lemon, thyme candy rocks are very pleasant to drink with a cup of hot tea.

The rock candy tastes better than sugar, so you can use sugarcane branches instead of sugar and tea with high brittleness, easily crushed and dissolved.

Crystals formed around a thread are called Branch rock candy.

Rock crystals form around a stick. Lolly rock candy are healthier than plastic straws because the wood is boiled three times and is perfectly healthy but the plastic straws are unhygienic and carcinogenic.

This type of candy, which is formed on the floor and wall of the caldron, is mostly offered in bulk because of its irregular shape. The high concentration of juice in the bottom of the caldron causes to be aggregate.

This type of rock candy is thicker than sugar and it is the crumbs that are highly soluble.

The rock candy is made of sucrose and has a high anti-bloating properties. The rock candy has a warmer nature than sugar. If you put the rock candy on the heat it will become a blackish brown that has a very bitter taste and is an effective drug for treating diarrhea.

Sucking a piece of candy will cough and relieve the violence of the voice and chest and pain.

Drinking rock candy with tea can relieve drowsiness and fatigue so it is best for those who drive at night to drink a cup of tea that rock candy. Saffron is also very effective in relieving excessive physical and mental fatigue from work and physical activity.

Consuming rock candy can relieve stomach pain as well as pain caused by muscle contraction. Boiling water with rock candy dissolved in it -in traditional medicine call it “Nabautdagh”- is very useful and effective for relieving back pain, improving leg pain and relieving abdominal pain.

The fame and originality of the rock candy is related to saffron flavored. But there are other flavored rock candies with special properties and uses for each flavor and they are very popular in the world. The rock candy is available in a variety of flavors of mint, cinnamon, cumin, lemon, saffron, thyme, which makes this delicious candy suitable for all tastes.

It is noteworthy that our company “kala Sepid Tarabar” as an international transportation & trading company has experienced and professional staff members in all matters related to any shipment (road – rail – sea-air and multi modal freight), so has always been able to serve the interests of its customers to purchase and export cargoes to all over the world as fast as possible as a strong advisor by choosing the best route and method of transport and positioning The global marketplace.